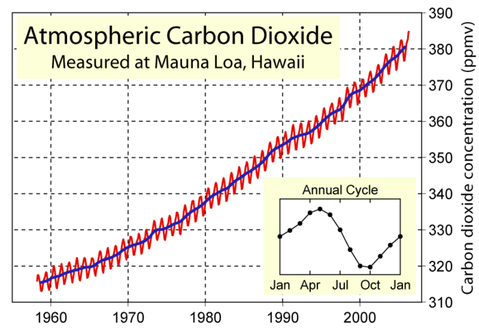 An American scientist, Charles Keeling, started measuring the amount of CO2 in the atmosphere in 1958 and after a few years noticed that the level was steadily rising.

Before the industrial revolution the level was 280 ppm, which is can be considered a normal level.

In the 1960's and 70's it was popularly believed that over the next few thousand years we would be heading for an ice age. Looking at the repeating pattern of ice ages and warm periods that was not a bad theory but it did not take into account the effect of putting billions of tons of CO2 into the atmosphere.

CO2 has now reached 400 ppm, the temperature has risen 1.1 C and the planet is way outside it's comfort zone.
Final page.  Outcome
Go to the Climate Outcome website  to see the effect