we get all our heat from the sun

﻿If you are out before dawn and the Sun comes up you can feel its warming heat.﻿

To get temperature into perspective.

The difference in temperature between Venus, Earth and Mars is not the distance from the Sun but the density of the respective atmospheres and the large amount of water on Earth, which is the major greenhouse gas, and the big difference in the parts per million   of CO2 in Earth's atmosphere.﻿ Venus has a CO2 level of 30,000 PPM while the Earth is only 400 PPM.
​ Venus has a surface temperature of 461 C, Earth is 15C, Mars is at -46C while the Sun has a surface temperature of 5750C, Just to complete the picture, space is absolute zero which is -273.5C, 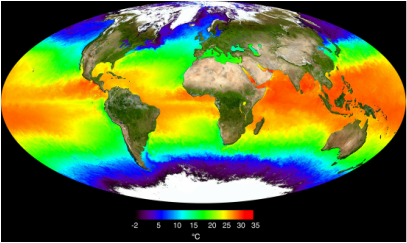 Humans are very adaptable and we tend to forget our roots and our design specification.
Our comfortable temperature is about 23C (without clothes or fire) and the Earth ranges from about 25C at the equator to -20C at the Pole.
As we travel North or South,  roughly every 220  kilometers (140 miles), the temperature moves 1c.  This is very approximate but it does illustrate how temperature changes as we move around the globe.

The problem for us is, despite our toughness, the plants on which we live are not so resilient and for them a 3C temperature shift is a big deal.

The important thing is balance 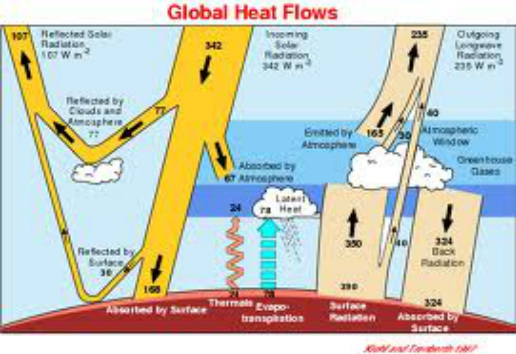 This diagram illustrates how the heat from the sun enters the atmosphere, is caught by the moisture in the atmosphere and CO2 and retained for a while but eventually is radiated into space.

The same amount of heat that comes in to our planet must leave in equal quantities
or the temperature will get steadily warmer.
We call gasses such as CO2, Methane, Nitrous Oxide and water vapour, greenhouse gasses because they trap heat in the atmosphere. Heat from the sun, at 5600C, radiates at the frequency of light at 380 to 740 nano metres which travels straight through the atmosphere but  heat radiated  from the Earth at the lower temperature of 14C is radiated at 1750-2000 nano metres and is restricted by the greenhouse gasses and consequently trapped and warms the planet.
If it were not for the moisture and the CO2 in the atmosphere to retain some heat, the temperature of the Earth would be 37C cooler. Around -20C and would be a ball of ice.
Although moisture is the largest warming gas it is an amplifier of the greenhouse gasses, CO2, methane, ozone and nitro oxide.
How the temperature starts to change