﻿The natural cycles of ice ages and warm periods﻿

The original theory was calculated by
Milutin Milankovitch 100 years ago and when checked with satellites has been found to be correct.

CHANGE IN THE EARTHS TILT 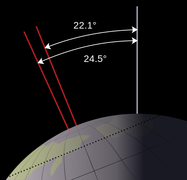 The eccentric orbit  of the Earth around the Sun means that every 120,000 years or so we get closer to Jupiter, the giant of the Solar system, and it's gravitational proximity pulls us over and increases our angle of tilt by just 2.4 degrees.

The planet warms a few degrees 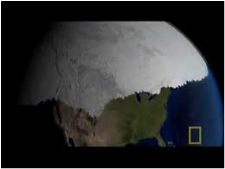 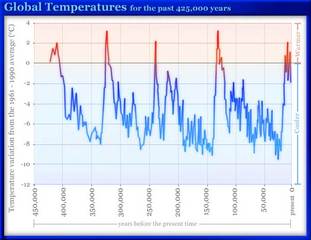 Evidence of the ice age cycles comes from ice cores and now goes back one million years.
The Earth cycles between a warm period, as it is now, and the more normal 5C cooler period.
As the planet warms the ice melts and sea levels rise over a range of 120 meters.

CO2 released from sea and earth 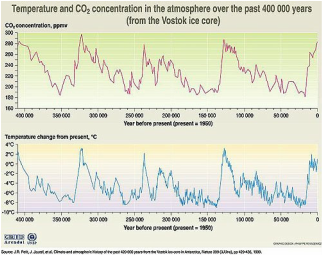 The level of CO2 in an ice age is 180 parts per million and in a warm period it rises to 280 ppm.
As the ice melts and the temperature starts to rise, CO2 is released from the warmer sea and soil and this warms the  atmosphere further. It also increases the release of methane a more powerful greenhouse gas.
This starts a chain reaction, called forcing, that pushes the temperature even higher.
Eventually the temperature reaches the levels we have today in what is known as the Holocene period. The little blue squiggle on the right hand side of the blue graph above.

The warm period and what happens next. 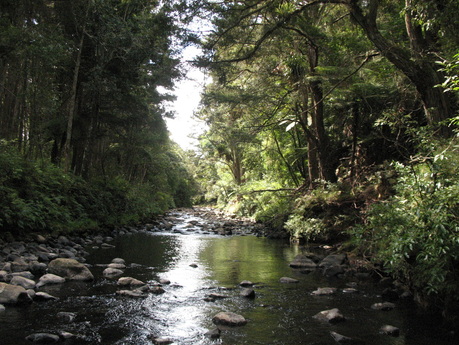 The Holocene period has given us 10,000 years of warm stable temperature during which time humans have flourished and spread all over the World.
With the combination of warmth and rainwater northern areas, which had been covered in ice, became habitable and highly productive desirable areas.
Farming was started and civilization developed at a steady pace.
The Industrial revolution commenced in about 1750 and was powered initially by water mills and wind mills.
The first efficient steam engine Stephenson's Rocket was built in 1829 and this started the coal driven era of the Industrial age.
Oil became a major source of power around 1900 and the modern industrial era was on its way.
The Natural Cycle