The last time the World had 400 ppm of was 3 million years ago and it was a different World.

Climate Outcome
Our trees in a Pliocene climate.

The Earth had 400 ppm  CO2 in the atmosphere  in the Pliocene era some 5 to 3 million years ago. 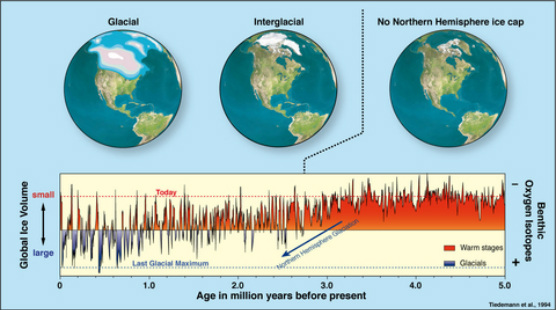 With  CO2 at 400 ppm we can expect to see some big changes to our environment and to our lifestyle,The detail is on the Climate outcome website. Some changes are apparent now such as a temperature increase of 1.1C, melting glaciers, changes in the weather with some regions having drought and some with excessive rain, changes in the oceans with fish migration, dying coral and shell fish.

Quote From the Alfred Wegener INSTITUTE.

Comparing the present time with the last time the Earth had CO2 at 400 ppm three million years ago.
"This time interval, with atmospheric CO2-concentrations close to modern ones, was significantly warmer than today. High-latitude sea surface temperatures were up to 7°C higher, the modern Northern Hemisphere ice cap over Greenland was absent, and the sea level was about 30 m higher than today. Hence, it represents a possible future climate scenario predicted by numerical models.

CO2 is now trapping heat in the oceans and atmosphere and we have an overall picture of where we are heading but how long will it take?
There is a considerable delay because most of the heat goes into the Oceans and is stored there. The next delay is that the extra warmth will melt glacial ice sheets which will in turn release more CO2 from the oceans and the land and this also takes time.
It is understood that there is a 40 year delay between the increased CO2 level and the temperature rise.
The Suns energy is still entering the atmosphere and not leaving and there are many government forecasts for the medium term period to the end of the century. This can help planners and farmers plan for the future but there are a lot of different elements and the combination of these can influence the timing of events.
One important bench mark, one meter of sea level rise, would inundate many major cities, infrastructure and farmland so can be considered a major economic disaster.
Another bench mark would be that a 3C temperature rise would cause massive loss of plant life and farming and food production can also be considered a major disaster. The oceans are absorbing CO2 and heat but this is not going to go on for ever.
﻿Changes have already started. Temperatures have already risen .9C, sea ice and glaciers are melting and the weather is changing.﻿
Plants and Wildlife.
The last time the world had today's level of 400 part per million of CO2 was three million years ago and the trees and plants at that time were adapted to the climate that went with it. Those trees had taken thousands or years to evolve to match those condition. The trees we have today are adapted to a CO2 level of 280 PPM and a climate 1.1C cooler than today and are rapidly going into conditions 2C warmer and with dramatically changed rainfall conditions of either drought or flood.
We can expect to see much large numbers of trees and other plant life dying in the coming years and food production will be under considerable threat.

More detail can be seen on climateoutcome.kiwi.nz